Paris: A book fair before the book fair 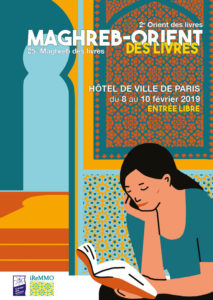 Before the opening of the awaited Paris Salon du livre that takes place in March, there is another important event that is worth getting acquainted with : a book fair entirely devoted to the Maghreb and the Middle East. The Association Coup de Soleil launched the “Maghreb des livres”, initially focusing on the North-African region back in 1994. In 2018, thanks to the impetus and the close collaboration with the iReMMO (Institute of Research and Studies on the Mediterranean and the Middle East – http://iremmo.org/), this event has broadened its geographical and cultural focus to also cover the Middle Eastern region thus becomeing “Maghreb-Orient des livres”! This book fair allows to strengthen the sharing of literary (poetry, fiction, comics) and scientific (social and human sciences) expression and also the deepening of knowledge on the contemporary culture(s) of the entire region.

This book fair is all the more important as it is the only devoted to the Maghreb region in general and allowing editors and writers from North African countries to meet. While stressing the dire need of a structured book sector in the Maghreb, the literary critic and editor of En toutes Lettres, Kenza Sefrioui states that the existing book fairs in Casablanca, Algiers and Tunis do not represent high-points for the book and literary sector in the whole region.

After the success of the first edition of in 2018, this year the “Maghreb-Orient des livres” was held from 8 to 10 February at the Hôtel de Ville (the main town hall) in Paris. With the participation of more than 145 writers and a number of publishing houses and book shops from France, the Maghreb and the Middle East (from Egypt to Iran and Turkey, the Arabian Peninsula and the Levant) this event is open to the public for three whole days. To mark the 25 years of the “Maghreb des livres” and the 2 years of “Maghreb-Orient des livres”, the rich and varied programme featured talks (also on cinema), debates, literary readings, book-signing sessions, interviews, meetings with authors and also artistic exhibitions (photos, paintings and illustrations). This year, two secondary schools and a high schools have been involved inviting students to engage in conversation with various writers.

This is an annual event not to be missed in Paris ! A perfect way to plunge into the atmosphere and discover new books and authors while waiting for the Paris Salon du livre !