Anthology of Maltese Poets in Greek 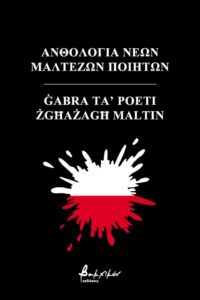 “It is with great pleasure that I introduce this volume of contemporary Maltese poetry written by young writers. Maltese literature is relatively very young, with the first important literary commitment venturing in the late nineteenth century. In such a short period this literature has come to comprise of a Romantic tradition, directly influenced by the Italian Risorgimento, and then a Modernist revolt, influenced by the local and international political and cultural events of the legendary, though largely hyped up 1960s. The politically turbulent 1980s in Malta, coupled with the extraordinary turn of events in Europe at the end of that decade, produced a different crop of writers who now, had a richer tradition to follow and to counteract, a different country and a different continent in which they were living. Indeed, the digital revolution of the nineties and the introduction of the ‘whole’ world in every household, utilising the web, forged a new reality and therefore a new literature.

This volume introduces contemporary Maltese poetry to a Greek audience, possibly the very first volume of its kind. Coming from a tiny island-state and, worse, writing in a language used only by some less than half a million natives, makes the literary journey of Maltese writers a difficult one. Becoming a full European Union member state in 2004 created an unprecedented situation for the Maltese writer: finally, other countries became curious about and interested in this young literature emerging from a country which physically is too small to make international news. Since joining the European Union, a number of Maltese writers (who are not included in this volume) have been translated and published in various countries in Europe and beyond.

Another intriguing development was the establishment in 1998 of Inizjamed, a cultural entity which is committed to promoting the cultures of the Mediterranean. Owing to Inizjamed’s commitment, a closer link to other Mediterranean cultures was set, including a strong link with Northern African literature which, given the proximity of Malta to Africa, was ironically hitherto practically unknown to Maltese readers. The Mediterranean dimension has never really been precluded from Maltese literature, but still, it has always been somewhat problematic. Lying almost equidistantly between Europe and Africa, the Mediterranean identity is not without its uncertainties. While the 1960s literature favoured a broader outlook, closer to Western Europe and the USA, really and truly the very geography and the physic of the island prohibited writers from deleting the Mediterranean – whatever that word may mean – from their work. Contemporary young Maltese poets have found it almost impossible to forget their Mediterranean origins and have kept the Mediterranean very close to their heart. Of course, the fascination with this sea, stone, colour and exotic food, might lead to a Romantic rendering of it, but, the sad happenings in the Mediterranean, ranging from environmental hazards to the human tragedy of emigrants crossing from Africa to Europe, have somewhat shattered the former idyllic narrative to a more sober and sombre account of the Mediterranean. The Sea has remained very present, very visible in its multiple shades and meanings.

Three of the poets in this collection have left the island. This is yet another significant development in the history of Maltese literature. Emigrating to mainland Europe, young Maltese writers introduced a new dimension to the literature written in Maltese but not necessarily inspired by the native island. Clifton Azzopardi and Elizabeth Grech both live in Europe while Karl Schembri, a former political and investigative journalist, lives in various Arab trouble stricken countries. Azzopardi’s poetry oscillates between an urban and a rustic setting, the latter depicting mainly the seaside and the life at sea. He also journeys to and from: from cities like Brussels and Paris, to his native abode with an ease that characterises contemporary denizenship. Grech’s poetry is more lyrical and closer to the Mediterranean touch. Hers is a poetry of emotion, of desire which spans over her vision of the Sea, and yet, it is also a political poetry bearing in mind that the Mediterranean is also the Middle East, with the ongoing crises in Palestine and Syria. Schembri, the poet, is ultimately Schembri the journalist and simultaneously the pilgrim who crosses different borders and journeys through countries where he is always the foreigner. He could even be a foreigner in his own country as he expresses scorn at his fellow Maltese and sharpens his pen with great cynicism.

Despite his young age Norbert Bugeja has already established himself in the international academia with his various studies on mainly Mediterranean writers. His poetry roams around the Mediterranean, choosing to visit the exotic, ebullient nooks and open spaces of various southern Mediterranean countries. Bugeja’s poetry is very physical, erotic most of the times, vibrant. Glen Calleja’s poetry is also very physical, and the human body is a central motif, but through his poetry readers come across a maimed, sick body. Indeed Glen Calleja’s most recent poetry collection deals with terminal illness as a central theme after the poet spent a lengthy period working with cancer patients. There is a certain playfulness in Miriam Calleja’s poetry. Her imagery and her choice of words both contribute to this cheerfulness even if, at times, the argument is not joyful. Miriam Calleja’s baggage is diverse in that she writes both in Maltese and English, using, thus, Malta’s two official languages. This volume also includes Leanne Ellul’s poetry. The youngest of the group, Ellul, with an academic background in linguistics, uses poetry to play with words. Her poems in this collection are lively, almost mischievous and also very physical, with a feminist voice whispering in the background.

I hope this collection serves as a good introduction of young Maltese poetry to a Greek readership. There are a number of qualities which are common in all the poets, yet, I believe, the choice presents a varied spectrum of what is being written by the upcoming generation of Maltese poets.”

My News, My Poetry