Like many other Mediterranean cities, Malta’s capital city, Valletta has been sculptured by the different passages of foreign powers throughout history. The Phoenicians, Greeks, Carthaginians, Romans, Byzantines, Arabs, the Order of the Knights of St John and the British Empire have successively moulded the city’s urban landscape. Today, the city is not only a big museum but also a daytime shopping centre for both Maltese and tourists. The majority of national administrative buildings are situated in Valletta. Since it was officially recognised as a World Heritage Site by Unesco in 1980, the Maltese have become increasingly aware of its architectural beauty and started engaging is reviving its energy by changing, renewing, rebuilding, restoring spaces and modifying the network of its urban fabric.

The City Gate Project a regeneration of the entrance to the fortified city, conceived by Italian architect Renzo Piano, is the largest structural development in Valletta. City Gate is a landmark site, a meeting point and transit for thousands of inhabitants and tourists than enter and exit the capital cit every day.

Piano’s project aims to restore the bridge to its original dimensions of 1633. The street crossing above will be demolished and two large staircases will be built. Another exterior staircase will connect the Gate to the ditch. The Former Opera House site (demolished during WW2) will be redesigned as an open-air theatre. A new building will be constructed to host the Parliament and the Museum of Maltese History and Political Development. This project was the topic of endless public debate and conservative opposition was strong, however the project was approved in 2010 and is currently under construction.

David Pisani, a professional photographer specialising in architecture and design has teamed up with urban anthropologist Elise Billiard, artist Julia Pallone and filmmaker Mark Dingli to form TRANSIT, an urban art project aims to raise awareness on the link between built environment and the social fabric of a city through creativity, artistic expression, urban research and audio-visual documentation.Transit’s main objective is to understand how urban re-development effects residents’ and visitors’ behaviour, memory, movements and urban itineraries. 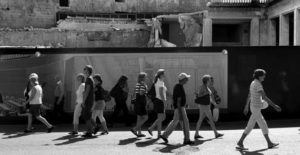 How was Transit born and why?
Shortly after the Renzo Piano designs for City Gate were presented to the public I was commissioned to photograph the exhibition and models of the project. As I worked on the site visitors would ask me questions about the project and it soon became apparent that nobody really understood what the project was about, or what effect it would have on the city life. The run up to the project had been in the media for years and was highly politicized. As a consequence of all that hype many questions about the project were simply ignored. Together with Elise Billiard we developed an urban art project that would discuss some of these issues. TRANSIT has been funded by the Malta Arts Council and has the full support of the Ministry for Infrastructure, Transport and Communication under whose governance the City Gate project is being developed.

What does the project consist of?
We are documenting the project as it unfolds from various aspects, not just the demolitions and reconstructions but also the way people react to the building project. We are recording sounds and interviewing people about the project and about the city in general. TRANSIT will be holding an exhibition in early 2012 and will publish an art book with extensive documentation and research material.

Do you intend placing it in a wider perspective with regards to other Mediterranean cities?
From our research we are finding that the city is a global phenomenon, and not a regional one, and that in fact the world itself is (at least statistically) becoming one endless city. On our blog we post ideas and reflections of urbanism and city life from all over the world.